SiSoftware » Reviews » ARM big.LITTLE: The trouble with heterogeneous multi-processing: when 4 are better than 8 (or when 8 is not always the “lucky” number)

ARM big.LITTLE: The trouble with heterogeneous multi-processing: when 4 are better than 8 (or when 8 is not always the “lucky” number)

ARM’s big.LITTLE arch made big waves on launch way back in 2011; it was heralded as a great way to combine performance with power: a “big” (computationally powerful but power hungry) core was to be coupled with a “LITTLE” (slow but low-power) core – and switched as needed. The way they would be switched has changed as both the SoCs and the OS scheduler managing it all have evolved – but as we shall see not necessarily for the better.

The “poster child” for big.LITTLE has been Samsung’s Exynos family of SoCs as used in their extremely popular range of Galaxy phones and tablets (e.g. S4, S5; Note 3, 4; Tab Pro, S; etc.) so we shall use them to discuss – and benchmark – various big.LITTLE switching techniques.

CS was the first type of switching used that arranged the big cores into a “big cluster” and LITTLE cores into a “LITTLE cluster” – with the whole clusters switched in/out as needed. Exynos 5410 SoC (e.g. in Galaxy S4) thus had 4 Cortex A15 cores in the big cluster and 4 Cortex A7 in the LITTLE cluster – 8 cores in total – but only 4 cores could be used at any one time: 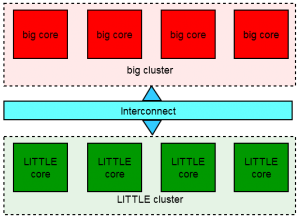 Working out when to switch clusters optimally was difficult – especially with users demanding “no lag” but also good battery time: you want quick ramping of speed on events (fast interaction) but also quick sleep. Do it too conservatively you get “lag”; do it too many times you use too much power.

On single-threaded workloads, 1 high-compute thread would require the whole big cluster to be switched on thus wasting power (theoretically the other 3 cores could have been parked/disabled but the scheduler did not implement this) or run slower on the LITTLE cluster.

But it was “symmetric multi-processing” (SMP) – aka all cores were the same (either all big or all LITTLE), thus making parallel code “easy” with symmetric workloads for each core.

IKS added granularity by arranging each big and LITTLE core in one cluster – with the cores within each cluster switched in/out as needed. Exynos 5420 SoC (e.g. in Note 4) thus had 4 clusters, each made up of one Cortex A15 + one Cortex A7 core – 8 cores in total – but again only 4 cores could be used at any one time: 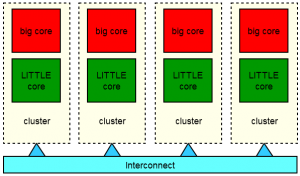 While we no longer had “true SMP” – programmers could still assume it was SMP (aka all cores the same) with the scheduler hopefully switching the same cores within each cluster given symmetrical workload on each cluster.

HMP is really a fancy name for “asymmetric multi-processing” (AMP) where not all the cores are the same and there are no more clusters (at least hardware wise) – all cores are visible. Exynos 5433 (e.g. Note 4) thus has 4 Cortex A57 + 4 Cortex A53 cores – 8 cores in total with all 8 on-line if needed.

It is also possible to have different number of big and LITTLE cores now, e.g. Exynos 5260 had 2 big and 4 LITTLE cores, but normally the count is the same:

Unfortunately this pushes some decisions to the app (or algorithm implementation library) programmers: is it better to use all (8 here) threads – or 4 threads? Shall the scheduling be left to the OS or the app/library? It is definitely a headache for programmers and won’t make SoC makers too happy as their latest chip won’t show the performance they were hoping for…

Is it better to use all or just the big cores? Is 4 better than 8?

While in some cultures “8” is a “lucky number” – just witness the proliferation of “octa core” SoCs almost without reason (Apple’s iPhones are still dual-core and slow they are not) – due to HMP we shall see that this is not always the case.

In x86-world, Hyper-Threading created similar issues: some computers/servers had HT disabled as workloads were running faster this way (e.g. games). Early OSes did not distribute threads “optimally” as the scheduler had no knowledge of HT (e.g. 1 core was be assigned 2 theads while the other cores were free) – thus some apps/libraries (like Sandra itself) had to use “hard scheduling” on the “right” cores or use less threads than (maximum) OS threads.

For phones/tablets there is a further issue – SoC power/thermal limits: using all cores may use more power than just the big cores – causing some (or all) cores to be “throttled” and thus run slower.

For parallel algorithms where each thread has the same workload (symmetric or “static work allocator”) using all cores can mean that the big cores will finish first and thus wait for the LITTLE cores to finish – effectively ending up with all LITTLE cores:

Parallel algorithms may thus need to switch to more complex asymmetric (or “dynamic work allocator”) that monitors the performance of each thread (within a time-frame as threads could be migrated to a different core by the scheduler) and assign work accordingly.

Alternatively, implementations may thus have to make decisions based on hardware topology or run quick tests/benchmarks in order to optimise themselves for best performance on the target hardware. Or hope for the best and leave the scheduler to work things out…

Using “hard affinity” aka scheduling threads on specific cores, we have tested the 3 scenarios (only big cores, only LITTLE cores, all cores) on the HMP Exynos 5433 SoC (in the Note 4) across all the benchmarks in Sandra in order optimise each algorithm for best performance.

Despite the lack of algorithm optimisations – to deal with HMP and thus “asymmetric workload allocation” – it is good to see that using all 8 cores is *generally* faster. In honesty we’re a bit surprised. It seems that the OS scheduler does pretty well all by itself and most workloads should perform pretty well and things can “only get better” 😉

True, heavy SIMD (Neon) workloads allow the big cores to show their power – they are over 2-2.6x faster (more than just clock difference at 46%) – and here using just the big cores is faster between 17-25%. Some of this may be due to the additional stress on the memory sub-system which now has to feed 8 cores not 4, with the bandwidth per core decreasing.

The problem would be bigger in 64-bit ARMv8 mode where FP64 code could finally use SIMD/Neon – while crypto algorithms (AES, SHA) are hardware accelerated and thus bandwidth would count more than compute power. Again this is similar to what we saw in x86 World with HT systems.

However, again just relying on the scheduler to “wake” and migrate the threads on the big cores may be enough – no further scheduler may be needed.

Despite our reservations – the Exynos 5433 performs better than expected – with all its 8-cores enabled/used, with the LITTLE Cortex A53 cores punching way above their weight. The big Cortex A57 cores do show their power especially in SIMD Neon code where they are far faster (2-2.6x). Unfortunately in ARMv7 32-bit mode they are a bit hamstrung – unable to use FP64 Neon code as well as crypto (AES, SHA) hardware acceleration – a pity. Here a 64-bit ARMv8 Android version would likely be much faster but does not look like it will happen.

ARM has assumed they don’t need “legacy” ARMv7 code and everybody would just move to ARMv8: thus none of the new instructions are available in ARMv7 mode. Unlike Apple, Android makers don’t seem to rush to adopt an 64-bit Android and while simple Java-only apps would naturally not care – the huge number of apps using native code (though the NDK) just won’t run (similar to other platforms like x86) – making compatibility a nightmare.

The proviso is that heavy SIMD/Neon compute algorithms (e.g. Binomial, S/DGEMM, S/DFFT, etc.) use only 4 threads – hopefully migrated by the scheduler to the big cores – and thus perform better. Unfortunately there don’t seem to be APIs to determine whether the CPU is HMP – thus detection is difficult but not impossible. Using “hard affinity” aka scheduling threads on the “right” cores does not seem to be needed – unlike in x86-World where early OSes did not deal with HT properly – it seems the ARM-World has learned a few things.

In the end, whatever the OS – the Cortex A5x cores are performing well and perhaps one day will get the chance to perform even better, but don’t bet on it 😉