What is the “Processor Inter-Thread Efficiency” Benchmark?

The “processor inter-thread efficiency” benchmark (ex. “multi-core Efficiency“) in SiSoftware Sandra has been specially designed to measure inter-thread/core/module/node/package communication efficiency of modern processors. It has been designed back in the days of the “Intel Pentium-D” (effectively two Pentium 4 in the same package) to show the differences of inter-thread data transfers (both latency and bandwidth) depending on thread (unit) IDs.

Why is the “Inter-Thread” efficiency Important to be measured?

The topology of modern processors is complicated, and now consist of multiple-cores (that each may support 1, 2 or 4 threads) organized in modules (CCX on AMD naming) and further organized in modules, packages/die(s) and finally multiple-sockets in the case of SMP systems.

Unlike, say, server software (e.g. web-servers, file servers, some databases, etc.) that use independent threads working to handle independent requests, most modern software use multiple threads working together on the same workload where they need to share data between them. One of the most common way is “producer-consumer” paradigm where one thread passes processed data, messages, etc. to another thread for further processing – and then stating work on another block of data, message, etc. Asynchronous processing, deferred calls, queuing of messages, etc. also work on this general principle.

Due to processor topology, it is very important for software (or perhaps Operating System scheduler) to assign (aka “affinity“) the pairs of threads on the right physical processor units to facilitate speedy (aka low latency / high bandwidth) data transfers. Incorrect assignment can have a big detrimental effect on performance as not all pairing combinations are as efficient.

How does the benchmark work?

Our implementation also uses the producer-consumer model, with all combinations of thread pairs tested for latency and then bandwidth tested with various sizes of data blocks and chain lengths (number of buffers) between threads. Note that we need synchronization between the producer-consumer threads to signal block ready and this must be as efficient as possible to minimize overheads. 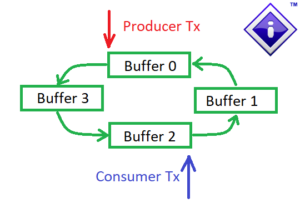 In a more complex system, like our AMD Ryzen 9 5900X example we have 2 modules/CCX (M0-M1), 12 cores (C0-C11) and 24 threads (T0-T23) and far more thread pairings (276), spanning cores, modules/CCXes and finally package. AMD EPYC processors also have multiple nodes on the same package/socket as well as multiple processors in a SMP system. 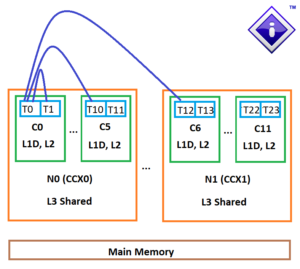 For latency we test the smallest data item that can be passed between threads (aka cache line, 64-bytes on x86) and measure the aggregate latency of producer thread write (PTx) and consumer thread read (CTx) in nanoseconds (ns). By analyzing all the combinations we are thus able to select the best pairings based on the lowest latencies that should also result in the highest bandwidths.

Sandra allows the user to select either:

Sandra measures the bandwidth for various block sizes and chain lengths as these are the most common transfer sizes and lengths:

Finally, based on the above measurements we can generate the scores for:

As is aware of processor topology (as its has its own thread scheduler, we can also compute:

Naturally only the relevant scores are computed and displayed depending on processor topology: if the system does not have multiple modules/CCX there is no inter-module latency. Similarly for nodes, packages, etc.

Unlike Intel Core processors with monolithic L3 caches and all cores on the same die/module, AMD Ryzen processors are built around “chiplets” / CCX (core complexes) that we generically call “modules” of 4 (Series 1000-3000) or 8-cores (Series 5000+) with a shared L3 cache (8-32MB). Their topologies thus have 3 hierarchy levels (threads, cores, modules) rather than 2 (threads, cores) and thus require Operating System scheduler modifications to schedule threads in the best fashion.

Sandra thus must test all the combinations between the 24 threads (units) and compile the list of the latencies between them: 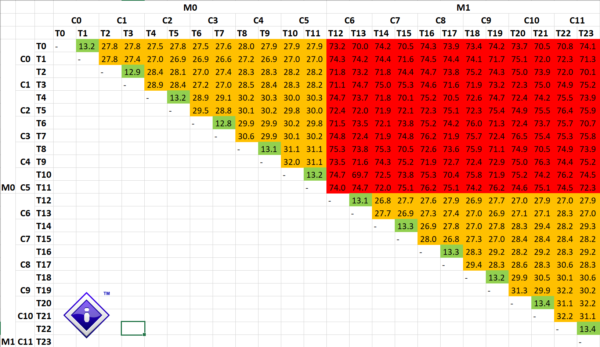 We can clearly work out the topology of the processor – even without knowing its details:

Sandra can then compute the average latency for all thread pairs and also for each combination type: 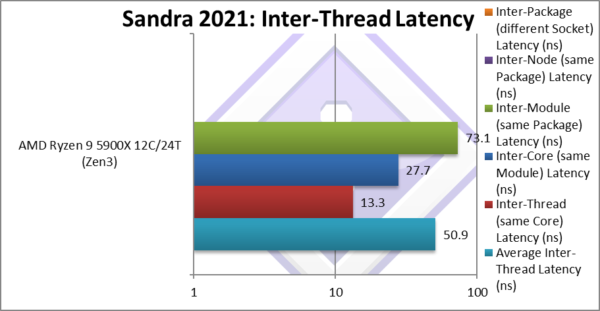 By selecting the best (aka lowest latencies thread-pairs) and worst (aka highest latencies) we can measure the bandwidth when transferring different block sizes and different chain lengths: 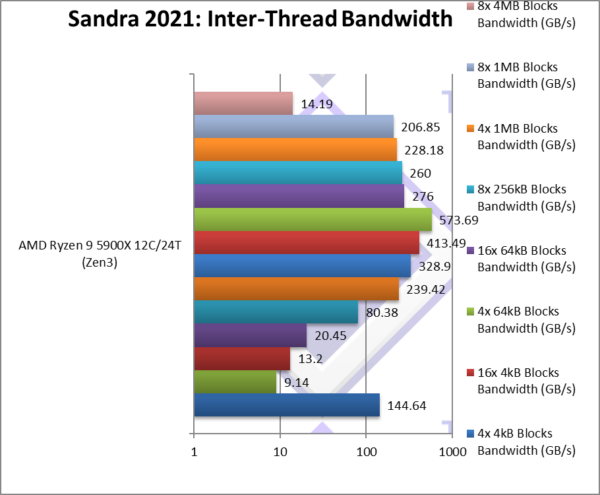 Again, even without knowing processor topology we can draw some basic conclusions:

We can just how much the bandwidth varies from the best pairing (~144GB/s) to worst (9.14GB/s) – i.e. 1/15x lower – a catastrophic drop in performance which would hugely impact performance.

We hope you enjoyed this in-(more)-depth overview of one of Sandra’s main benchmarks. Be sure to check out our very latest version SiSoftware Sandra 2K21.