AMD’s Zen2 TR3 (“Starship”) is the “true” 2nd generation ZEN core on 7nm process shrink while the previous ZEN+ TR2 (“”) core was just an optimisation of the original ZEN TR that introduces many design improvements over both cores. Unlike desktop parts – a new socket “sTRX4” is introduced thus new mainboards based on the new chipset “TRX40” are required. 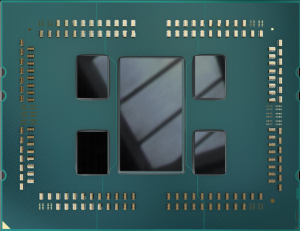 Even with previous ThreadRippers AMD used to recommend UMA mode (interleave across nodes) rather than NUMA mode (interleave across channels only) – despite the fact that some CCXes naturally had to access memory through (other) CCXes with DRAM controllers at much higher latency. Now, with TR3 and sIO-based memory controllers there is a weaker affinity between cores/CCX/chiplets and DRAM controllers thus NUMA mode is pretty much gone.

SiSoftware has always “disagreed” with AMD on this – with our recommendation to always use NUMA mode and that even normal Ryzen should have a “fake NUMA” mode where each CCX/chiplet is a “NUMA node”. This would have instantly greatly improved performance as all NUMA-aware operating system (OS) schedulers would not migrate threads off NUMA modes (aka CCX/chiplets) nor would it require “Ryzen/TR custom power management profile” on Windows client/server.

While recent Windows kernels have improved matters (especially with custom profile), we still need to wait for 2020 kernel for better scheduling.

What’s new in the Ryzen2 core?

We are comparing the top-of-the-range ThreadRipper 3 (3970X, 3960X) with previous generation TR (2990X) and competing architectures with a view to upgrading to a mid-range high performance design.

The only “problematic” algorithms are the memory bound ones where the cores/threads (due to SMT we have 24!) are starved for data and due to contention we see performance lower than less-core devices. While larger caches help (thus the massive 4x 16MB L3 caches) higher clocked memory should be used to match the additional core requirements.

Executive Summary: Ryzen2 is phenomenal and a huge upgrade over Ryzen1/+ that (most) AM4 users can enjoy and Intel has no answer to. 10/10.

Just as original Ryzen forced Intel to increase (double really) core counts to match (from 4 to 6 then 8), Ryzen2 will force Intel to come up with even more (and better) cores in order to compete. 3900X with its 12-cores soundly beats CFL-R 9900K (8-cores) in just about all benchmarks and in some tests goes toe-to-toe with HEDT SKL-X AVX512-enabled (10-cores) except in memory-bound algorithms where the 4 DDR4 memory channels with 2x more bandwidth count. For that you need ThreadRipper!

Ryzen1/+ was already competitive with Intel on integer and floating-point (non-SIMD) workloads but would fare badly on SIMD (AVX/FMA3/AVX2) workloads due to its 128-bit units; Ryzen2 “fixes” this issue, with its 256-bit units matching Intel. Only SKL-X with its 512-bit units (AVX512) is faster and Intel will have to finally include AVX512 for consumer CPUs in order to compete (IceLake?).

For compute-bound workloads, the forthcoming 3950X with its 16-cores/32-threads brings unprecedented performance to the consumer/desktop segment pretty much unheard of just a few years ago when 4-core/8-threads (e.g. 7700K) were all you could hope for – unless paying a lot more for HEDT where 8/10-core CPUs were far far more expensive. Naturally we shall see how the reduced memory bandwidth affects its performance with likely very fast DDR4 memory (4300Mt/s+) required for best performance.

Let’s also remember than Ryzen2 adds hardware mitigation to its remaining 2 vulnerabilities while Intel has been forced to add MDS/”Zombieload” even to its very latest CFL-R that now loses its trump card: hardware RDCL/”Meltdown” fix not to forget the recommendation to disable SMT/Hyperthreading that would mean a sizeable performance drop.

What is astonishing is that TDP has remained similar and with a BIOS/firmware upgrade, owners of older 300-series boards can now upgrade to these CPUs – and likely not even change the cooler unit! Naturally for PCIe4.0 a 500-series board is recommended and 400-series boards do support more features in Ryzen2/+ but let’s remember than on Intel you can only go back/forward 1 generation even though there is pretty much no core difference from Skylake (Gen 6) to Coffeelake-R (Gen 9)!