It is the 4th generation of the Raspberry Pi series of single-board computers (SBC) that can be consider to have single-handedly restarted the enthusiast computer revolution of the 1980s. Selling millions of units per year, it is the best selling UK computer and used far and wide for many projects.

Unlike x86 world, where main-boards need discrete CPUs, graphics boards, memory modules, etc. to function – in the ARM world this is not common, with single-board containing not just the SoC (CPU, graphics) but also soldered memory, Ethernet, WiFi/Bluetooth that are not upgrade-able. 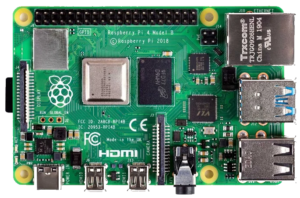 The Pi has always used custom-made Broadcom SoCs based on the ARM architecture (BCM series) – with the Pi4 now using AArch64 64-bit Cortex-A cores. While previous Pi versions were limited to 1GB memory, the Pi 4 with 2-8GB can now run a wider range of operating system and applications – including Windows Arm64.

By contrast, Windows 10/11 Arm64 is able to run both native AArch64 applications (compiled for Arm64 like Sandra) as well as emulating x86/x64 and also ARM (AArch32) native applications through WOW (Windows on Windows emulation ). While it does come with native versions of in-box drivers for many peripherals/devices – it may not a driver for very new peripheral/device and the manufacturers are unlikely to provide support for Arm64. For some devices, standard in-box “class” drivers (e.g. NVMe controller/SSD, AHCI controller/SSD, USB controller, keyboard, mouse, etc.) do work but otherwise a driver is required.

How do I get Windows Arm64 on Raspberry Pi 4B?

Thanks to a team of extremely talented developers (far more talented than us) and lots of work – firmware (BIOS/UEFI), drivers and even an installer automatically creates a bootable micro-SD or USB drive:

What hardware do I need to run Windows Arm4 on Raspberry Pi 4B?

In addition to the Pi itself, we recommend additional hardware as Windows is quite a demanding OS:

While the 2GB Pi 4 version has just about enough memory to run Windows 10/11, more memory is good for disk caching with the 4GB version likely best value. While original firmware/drivers required limiting memory to 3GB – current firmware/drivers can use up to the full 8GB.

The most important thing is the storage as most micro-SD cards do not have the I/O small-block performance necessary; A2-rated micro-SD cards require updated SD controllers that the Pi does not have. Your best bet is using the USB 3.0 controller with either a SATA or NVMe SSD or a high-performance USB stick.

Despite firmware updates, the Pi 4, especially overclocked, does require decent cooling – thus use either an all-metal case (if you prefer no noise) or a fan/heatsink combo should you want to overclock higher. Do note that metal cases do attenuate the WiFi/Bluetooth signal from the internal antenna – however you are best using the Ethernet connectivity for best network performance.

The (arguably) most important upgrade vs. Pi 3B(+) is the larger memory versions (2, 4, 8GB) that allow the running of far heavier operating systems (OS) like Windows that are not really usable with just 1GB memory. In addition, the new USB 3.0 controller allows the use of much faster storage – far beyond the standard SD controller that all PIs generally use.

Unlike newer cores, the older A7X cores do not support SVE (“Scalable Vector eXtensions” – the successor of NEON), although current designs are still just 128-bit width although they do provide more flexibility especially when implementing complex algorithms.

Crypto: Similar to x86, ARM does provide hardware-accelerated (HWA) encryption/decryption (AES, SM3) as well as hashing (SHA1, SHA2, SHA3, SM4) – but the Broadcom SoC cores have these features disabled! Thus the Pi does not perform well as a crypto device.

Virtualisation: The ARM cores do have hardware virtualisation – but currently the UEFI firmware does not provide the required fuctionality to enable Hyper-V (which is not publicly available anyway). You will need VmWare ESXi ARM edition or KVM (e.g. Proxmox 7 PVE) and then perhaps try to run Windows 10/11 Arm64 on it!

We are comparing the Raspberry Pi with Atom x64 processors of similar vintage – all running current Windows 10, latest drivers.

This is an independent article that has not been endorsed nor sponsored by any entity (e.g. Raspberry, Broadcom, Intel, etc.). All trademarks acknowledged and used for identification only under fair use.

We think: not yet! But the signs are not good…

The Pi 4B with its relatively old Cortex A72 cores is not a competitor x86, but might still replace the need for no-name/generic x86 little boxes – generally based on ancient Intel Atom Z8000, J1900, AMD G-Series or similar. While many of them are used for networking purposes (e.g. router/gateway/VPN) – a huge number are bought and used to run Windows as a cheap mini-computer! These are far more expensive, consume far more power, are less reliable and not much faster than the Pi 4B – not to mention even less supported (BIOS update anyone? ME/TXE firmware updates?) than the unofficial Pi running Windows!

They are nothing but e-waste – which is bad for all of us. For such simple desktop uses – browsing, word-processing, media-consumption, simple games (Crysis?) – the Pi 4B could fulfill the role so much better. Cheaper, less power hungry, less noisy (with passive case cooling), more secure, more reliable – and should you decide to repurpose it, there are many, many projects you could use it for. Or sell it / donate it – the Pi keeps its resale value similar to Apple devices.

The Raspberry Pi range has been a huge success, there is no question about that. But due to its ARM platform – it had always run a flavour of Linux (can also run FreeBSD, etc.). Windows, for all its issues – it is still the desktop leader and this does not seem to be changing any time soon. While there have been ARM versions of Windows going back decades (Windows CE, Windows Mobile), the kernel/Win32 API were unified with Windows Phone (now dead), and we had actual Windows tablets with Windows RT (also dead) – we finally have desktop 64-bit ARM64 Windows with feature parity with standard 64-bit x64 Windows.

Through emulation it was possible to run x86 code, but with just 1GB of memory and micro-SD for storage, while Pi 3B(+) could just about run Windows Arm64 (and we test that in Raspberry Pi 3B+ 1GB Review: Windows Arm64 on Broadcom BCM2837 article) – it was a “proof of concept” rather than usable system. The Raspberry Pi 4B with 4-8GB of memory and USB3 storage has changed all that.

But how is the performance for native ARM64 applications? We expect emulation to be slow (for current x86/x64 applications) – but how about native?

At stock/base clock – even with its 4-cores – the Pi 4B is slow against similar vintage Intel Atom CPUs – but those turbo much higher. With a good cooling system, it seems 2GHz is achievable without voiding warranty – and then the Pi starts trading blows with the older Atoms. If you ever used a Windows tablet/laptop with an Atom CPU – then the Pi 4B performs similarly and is very much usable. If you have a Pi 4B gathering dust for whatever reason – bought for a project that never happened – you can always try Windows on it.

The power efficiency (the whole thing consumes just 4W!), price efficiency (the whole thing including 4GB LP-DDR4 costs just approx. $55) is really 2nd to none. But beyond that – unlike copies/competitors (whether ARM or x86 based) – the Pi is a de-facto standard – with huge software developer support (just about every project under the sun has a Pi version of its software), countless add-ons/hats and other devices – making it far more useful than just any other board.

The other news is that Windows 10/11 for ARM64 performs well and is ready for desktop-class ARM processors – perhaps not from Raspberry Pi/Broadcom – but Qualcomm, Samsung, MediaTek and all the other “usual suspects” that currently make SoCs for phones/tablets. Using modern X1 or X2 ARM cores – rather than the much older Cortex A72 here – we could have a worthy x86/x64 competitor – perhaps not desktop class but certainly tablet/mobile.

We have also seen ARM-based new Apple Mac (M1 SoC) computers able to run native Windows 10/11 Arm64 through Parallels virtualization software! Perhaps in the future we will see the ARM64 version of Bootcamp – and thus be able to natively boot/run Windows on Mac again. Apple’s M1’s cores are (arguably) more powerful than ARM’s own – and the most serious competitor to Intel and AMD on laptop/tablet platform.

This is an independent article that has not been endorsed nor sponsored by any entity (e.g. Raspberry, Broadcom, Intel, etc.). All trademarks acknowledged and used for identification only under fair use.