In Windows 11, 64-bit x64 applications are now supported, in addition to 32-bit x86 legacy applications that were originally supported by Windows 10. As pretty much all Windows applications today are x64 – this was an important emulation feature if Arm64 Windows is to be credible.

This (also) means emulated applications are not limited to just 2GB memory (unless using AWE to use more which is pretty rare) – but can use any amount up to CPU addressing (16-128GB). We’ve been taking this for granted for more than a decade and can be a serious issue with the large files and data sets used today (2022). 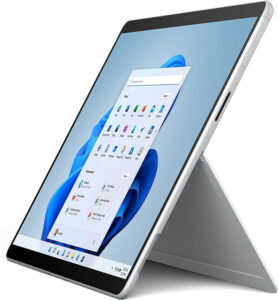 The WoW emulation layer on Arm64 Windows presents a Virtual x86/x64 CPU with the following characteristics:

Wow seems to be emulating an Athlon 64 in all aspects, including cache sizes – which is obsolete now; at least it is not a Pentium 4 as with Windows 10 emulation!

Here are the feature flags that this emulated x86/x64 CPU presents (we’ve cut the ones not present:

Thus we have SSE2, (S)SSE3 and SSE4.1/4.2 SIMD 128-bit wide instruction sets as well as some compare/exchange and pop-count instructions. This makes sense as Arm64 NEON SIMD is 128-bit wide. We don’t have crypto AES, SHA or RNG hardware acceleration support [but note that Pi 4B host does not have them either].

It is likely Microsoft will eventually add AVX/AVX2 support for SVE-enabled Arm64 CPUs – though SVE has variable width (from 128-bit to 2,048-bit) – but this can still help performance as wider vectors reduce register dependencies as we have relatively few registers on x86/x64.

Both page protection and 64-bit x64 support is available now. Virtualisation is supported on Qualcomm CPUs. [Pi 4 UEFI BIOS does not have required functionality]

While better than Windows 10 bare minimum x86 support – it is still somewhat lacking, with no AVX/AVX2 support that most modern Windows applications use – perhaps not directly but through numerical libraries.

Here Apple Mac “Rosetta” emulation is still more advanced – but Apple has gone all the way in and completely replaced x86 with their own Arm64 (M1+) CPUs – thus they do need good x86/x64 emulation for users to move to the new arch. Microsoft has no intention to abandon x86/x64 just yet but are just hedging their bets (after all after the “death” of Windows phone – the ARM team had to have something to do).

We are comparing the Microsoft/Qualcomm with Intel ULV x64 processors of similar vintage – all running current Windows 11, latest drivers.

Environment: Windows 11 x64/Arm64, latest drivers. 2MB “large pages” were enabled and in use. Turbo / Boost was enabled on all configurations where supported.

Windows 11 emulation has been improved, with x64 support finally allowing modern Windows applications to run on Arm64. Now, you can at last run all your applications – save some that include kernel drivers (e.g. drivers, anti-virus, utilities, some VPN, etc.).

The main issue is that it is not much faster – we still see a  performance degradation of about -30% (Arm64 native code vs. x64 emulated code) which needs to be improved. As most Arm64 designs are tablets (e.g. Microsoft Surface X) or thin & light notebooks (e.g. Samsung Galaxy Book Go) – the CPUs in these devices are not very compute powerful to start with.

The hybrid “big.LITTLE” (DynamiQ) technology that ARM has been deployed for many years – and Intel has recently “copied” with Hybrid “AlderLake” (ADL)  – also provides more efficient power utilisation at low compute workloads (I/O, etc.) and thus further reducing energy usage. For tablets or netbooks (aka small laptops) this is an important metric.

The performance/price efficiency (which depends entirely on the whole package not just the SoC) is no longer (much) better for emulation and comparable to native Intel. So if you will just be running x86/x64 emulated and not native Arm64 you may be better off with Intel… Note that getting Arm64 versions of software may mean upgrading/updating at a cost – not all ISVs will provide free updates if at all.

In summary, now x86/x64 emulation is decent but still needs improving – but this should not stop you for trying a new Arm64 tablet/laptop. Hopefully we will now see good value but well-spec’d tablets from other OEMs (Dell, HP, etc.) that are perhaps better spec’d than the existing ones (e.g. Samsung with Galaxy Book, Lenovo). We are eagerly waiting to see…