At SiSoftware – with Sandra – we naturally adopted and supported AVX512 from the start (before SKL-X) and added support for various new extensions as they were added in subsequent cores (VAES, IFMA52, VNNI, BF16, etc.) – this is even more disappointing; while it is not a problem to add AVX2 versions (e.g. VAES, VNNI) the performance cannot be expected to match the AVX512 original versions.

Let’s note that originally AVX512 launched with the Atom-core powered “Phi” GP-GPU accelerators (“Knights Landing” KNI) – thus it would not have been impossible for Intel to add support to the new Atom core – and perhaps we shall see that in future arch… when an additional compute performance uplift will be required (i.e. deal with AMD competition). 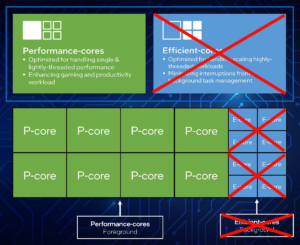 In this article we test CPU big Core performance; please see our other articles on:

ADL’s big/P Cores have improved decently over RKL – perhaps not a surprise as it is 2-generations over ICL/RKL and TGL had already shown decent improvements. The loss of AVX512 is painful in heavy compute SIMD algorithms and is missed.

Perhaps not unexpectedly, the LITTLE Atom cores do provide decent uplift (especially with non-SIMD/legacy code) that makes up for losing AVX512. Without them, ADL is not significantly faster than RKL. By handling background tasks, the LITTLE Atom cores can prevent the big Cores for being interrupted (literally) from their heavy compute work and thus perform better. With thousands (~2,000) of threads and hundreds (~200) of processes in Windows just looking at the desktop – this is no joke.

However, with the reduced/no LITTLE Atom core versions priced better – they likely represent better value, at least on the Desktop platform. On the mobile and perhaps SOHO server where power efficiency is at a premium, the LITTLE Atom cores should become more useful.

Long Summary: ADL is a revolutionary design that adds support for many new technologies (hybrid, DDR5, PCIe5, TB4, ThreadDirector, etc.) but the platform will be expensive at launch and requires a full upgrade (DDR5 memory, dedicated PCIe5 GP-GPU, TB4 devices, Windows 11 upgrade, upgraded apps/games/etc.). For mobile devices (laptops/tablets) it is likely to be a better upgrade.