For best performance and efficiency, this does require operating system scheduler changes – in order for threads to be assigned on the appropriate physical core/thread. For compute-heavy/low-latency this means a “big/P” core; for low compute/power-limited this means a “LITTLE/E” core.

In the Windows world, this means “Windows 11” for clients and “Windows Server vNext” (note not the recently released Server 2022 based on 21H2 Windows 10 kernel) for servers. The Windows power plans (e.g. “Balanced“, “High Performance“, etc.) contain additional settings (hidden), e.g. prefer (or require) scheduling on big/P or LITTLE/E cores and so on. But in general, the scheduler is supposed to automatically handle it all based on telemetry from the CPU.

Windows 11 also gets updated QoS (Quality of Service) API (aka functions) allowing app(lications) like Sandra to indicate which threads should use big/P cores and which LITTLE/E cores. Naturally, these means updated applications will be needed for best power efficiency. 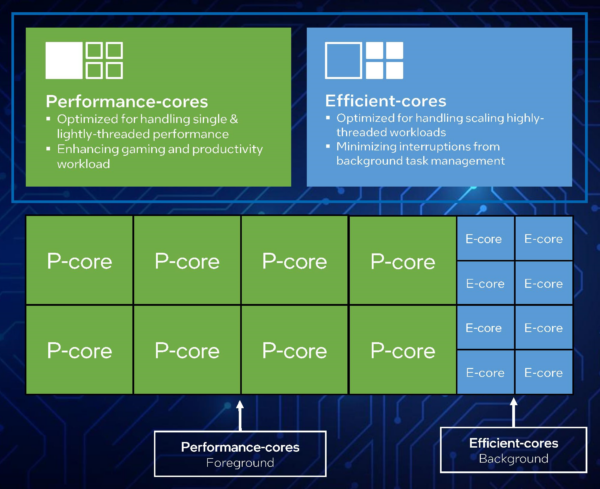 While for Atom cores AVX2 support is a huge upgrade – that will make new Atom designs very much performant (not just power efficient), losing AVX512 for Core is a big loss – especially for compute-heavy software that have been updated in order to take advantage of the new instruction set. While server versions still support AVX512 (including new extensions), it is debatable how much developers will bother now unless targeting that specific niche market (heavy compute on servers).

At SiSoftware – with Sandra – we naturally adopted and supported AVX512 from the start (with SKL-X) and added support for various new extensions as they were added in subsequent cores – this is even more disappointing; while it is not a problem to add AVX2 versions (e.g. VAES, VNNI) the performance cannot be expected to match the AVX512 original versions.

Let’s note that originally AVX512 launched with the Atom-core powered “Phi” GP-GPU accelerators – thus it would not have been impossible for Intel to add support to the new Atom core – and perhaps we shall see that in future arch… when an additional compute performance uplift will be required (i.e. deal with AMD competition).

The move to DDR5 (and LP-DDR5X) is significant, providing finer granularity (32-bit channels not 64)  – allowing single DIMM multi-channel operation as well as much higher bandwidth (although latencies will naturally increase). With an even larger number of cores (up to 16 now) – dual channel DDR4 is just insufficient to feed all these cores. But at launch, it may be cripplingly expensive.

ADL has been designed for efficiency – not performance at any cost regardless of power usage (like RKL); it is perhaps too much to expect it to beat RKL in everything. But overall it is encouraging.

With updated Sandra benchmarks (dynamic workload allocator), firmware/BIOS/OS (Windows 11) ADL is performing a lot better than what we’ve initially seen. It is likely its performance will improve in the future as both its firmware/BIOS and OS/applications are optimised further.

While we have not tested power here, ADL is likely to be very power efficient while running low-compute tasks (e.g. mainly I/O) with the scheduler only using LITTLE/E Atom cores and parking the high-power big/P cores. But when starting a heavy compute task – you suddenly have the full power of the big/P cores – with the LITTLE/E cores dealing with background threads (again I/O) – so that the big/P cores are not interrupted needlessly. For computers that spend most of their time (90%+) not performing heavy compute tasks – this should save a huge amount of energy.

This does not only applies in mobile/ULV market – ADL should also be a nice server (VM-host) CPU: with compute intensive VM threads using the big/P cores while less intensive, I/O and other background tasks relegated to LITTLE/E cores. For the desktop market, this is perhaps less important though less electricity usage is always a bonus in these challenging times…

As with RKL, the i7 version (Core i7 12700K – 8C+4c / 20T) will be better priced and thus most likely better value; it still includes 8 big/P cores for performance – with the loss of 4 LITTLE/E Atom cores of little importance.

Long Summary: ADL is a revolutionary design that adds support for many new technologies (hybrid, DDR5, PCIe5, TB4, ThreadDirector, etc.) but the platform will be expensive at launch and requires a full upgrade (DDR5 memory, dedicated PCIe5 GP-GPU, TB4 devices, Windows 11 upgrade, upgraded apps/games/etc.). For mobile devices (laptops/tablets) it is likely to be a better upgrade.